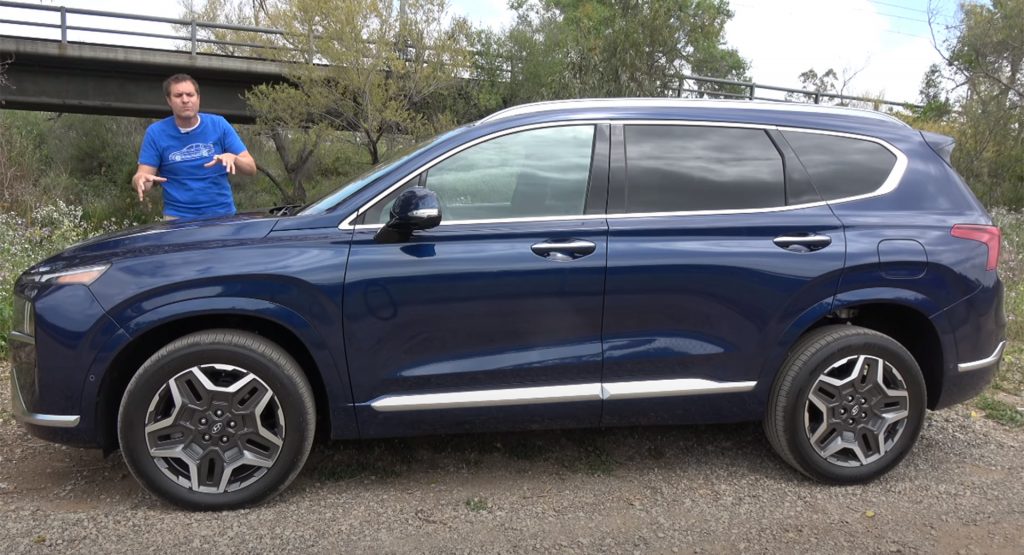 In facelifting the Santa Fe for the 2021 model year, Hyundai revised its platform and made changes both to the exterior styling and the interior.

The South Korean car manufacturer also launched the flagship Calligraphy variant. This is the subject of this most recent review from Doug DeMuro, who tested a model powered by a 2.5-liter turbocharged four-cylinder that pumps out 281 hp and 311 lb-ft (422 Nm) of torque.

In the U.S., Hyundai doesn’t offer the 2021 Santa Fe with a third-row and instead, limits the third-row option to the larger Palisade. While that means the Santa Fe won’t work for large families, the SUV still has a lot going it.

During his review, DeMuro checks out some of the intriguing features of the 2021 Santa Fe. For example, the SUV can be driven forward of backward with a simple press on the key. This is a feature also used by the likes of the Genesis GV80 and could be useful when parking in tight spots.

As for the interior, Hyundai made quite a lot of updates, including the fitment of a new console that incorporates large buttons used to shift the SUV between Neutral, Park, Drive, and Reverse, and has also equipped the Calligraphy with an all-digital gauge cluster. However, DeMuro doesn’t believe the interior feels like that of a $45,000 vehicle and, overall, admits to being confused by the Santa Fe Calligraphy, mentioning how its price and positioning in the Hyundai family is a little strange.