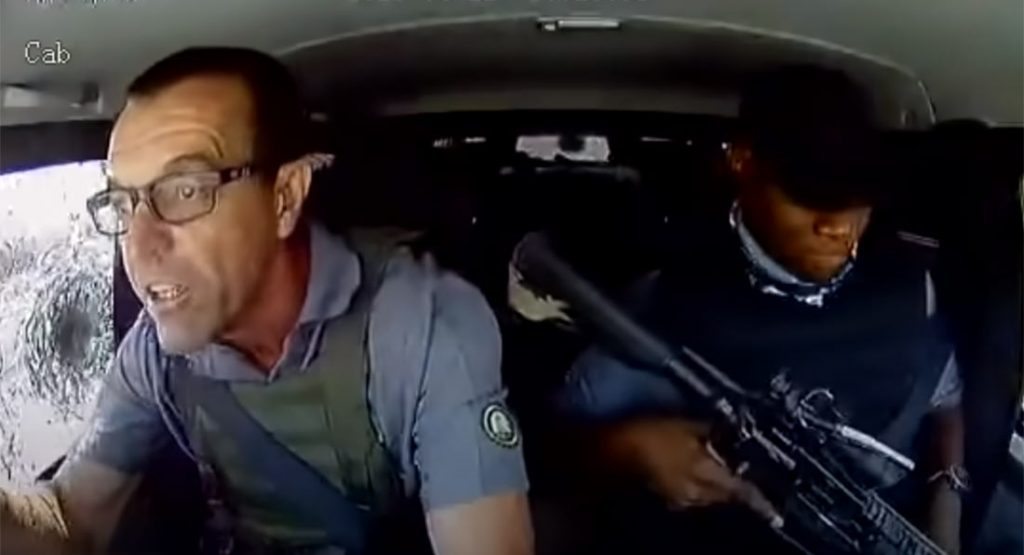 Incredible footage from inside an armored truck in South Africa has captured the moment the driver foiled an attempted cash-in-transit heist.

The video initially starts out by showing gunshots ring out, including at least one that hit the bulletproof window on the driver’s side. Instead of panicking, the driver swings into action and appears to immediately ram into one of the vehicles.

Read Also: Ford To Invest Over $1 Billion In Its South African Operations

As the video continues, the driver makes a host of maneuvers to escape the would-be thieves, including performing multiple U-turns. As he continues to flee, more bullets ring out, peppering the exterior of the Toyota Land Cruiser. And yet, despite having his life being at risk, the driver keeps his cool and does exactly what he needs to do to foil the heist. At one stage, he tells his passenger to cock a rifle and just seconds later, can be seen ramming into the side of a white pickup truck.

Local media reports that the incident happened in the city of Pretoria and that the driver in question was Leo Prinsloo, a former member of the South Africa Police Service’s Special Task Force, a hostage rescue and counter-terrorism organization, The Drive reports. Which pretty much explains why he reacted the way he did.

“On Thursday, 22 April, a group of men tried to rob a CIT vehicle on the N4 in Pretoria,” a spokesman for the South Africa Police told SA Trucker. “The suspects fired several shots at the CIT vehicle in an attempt to stop it during a high-speed chase. The driver of the CIT vehicle managed to evade the robbers for a while but later stopped in wait for the robbers. The robbers fled without taking any money. No arrests have yet been made.”